Painless Changes when the Requirements Change

Thanks to Haskell's industry-leading type system you can confidently make large refactorings.

Typically you don’t try to change core data structures in a rails or nodejs project after creating them. This always introduces bugs, so you typically avoid this unless the advantages are really big.

With haskell you have the confidence to change it all. The compiler will guide you through all the changes you need to do. When it finally compiles successfully again, you know it’s working. This is something you need to experience once to fully understand!

There’s one more thing to the auto reloading in dev mode: The refresh uses a diff based patch approach to avoid resetting the page state. This means: Changes are reflected instantly. For example when you change the HSX code of a form while you already filled some fields, the filled fields keep their values. This makes building with IHP very enjoyable and addicting

Like React's JSX. Write html code in your haskell files. This will be transformed to actual type-checked haskell code at compile time.

In HSX common errors like having a typo in an HTML attribute name or missing a closing tag will show you a compile-time error.

Automatic escaping in HSX ensures that all your views are safe against XSS issues.

Views in IHP are pure functions. So they can never directly trigger database queries. This design enforces clear separation of concerns.

To speed up your development process, IHP comes with a full set of web based dev tools. Including: a database schema designer, a web-based code generator, a web-based repl, …

It’s best to use the same database system everywhere. But then you always need to set it up. And what happens when different projects use a different version of postgres?

In IHP we’ve found a new way to solve this problem. IHP comes bundled with a postgres server. The IHP dev server automatically starts the postgres server, creates a database and inserts your fixtures. Your app is automatically wired up with the database using a unix socket. So even when you have your own local postgres running, thanks to the unix socket, it will not collide.

IHP is the first framework that delivers this out-of-the-box experience. If you’ve used this once, you never want to go back.

The Haskell Framework for Non-Haskeller's

Haskell is a great programming language. But, if haskell is so great, why is no one using it?

Haskell is not mainstream yet because it’s very hard to get into. There are lot’s of show stoppers where people give up on their haskell journey. Haskell beginners typically learn how to write small functions, but it takes a lot of effort to grow beyond that and build real world applications.

A big part of the software development world is web development. While haskell has had many great frameworks before IHP, you always needed to make a lot of decisions upfront: how to structure your project, what template library to use, what database library to use, stack or cabal, String or Text or Bytestring.

But when you’re just starting out with haskell, you typically just don’t know. And now you’re stuck. This is where haskell loses a lot of people.

With IHP we filled this gap. IHP is designed the other way around. It’s designed to be used without any experience in haskell. You can pick up haskell along the way. IHP helps you to get something on the screen in a few minutes. When you see your application come together, it’s easier to stick with haskell even when it’s a bit hard to learn.

To speed up your development process, IHP comes with a full set of web based dev tools. Including: a database schema designer.

The visual tools are very much inspired by SmallTalk. When you start an IHP app, they first thing you see is the data structures.

The visual tools are only editing the actual SQL statements. So if you like to stick to your text editor, you can just edit the raw SQL files.

IHP promotes the use of plain SQL over higher-level abstractions on the persistance layer. Instead of fighting complex Data Mapper ORMs, IHP provides simple database access functions that have a clear and direct mapping to the underlying SQL statements. IHP uses your SQL definitions to provide type-safe query builders.

Displaying Real-Time Data in Your Web Application Without Hassle. Auto Refresh offers a way to re-render views of your application when the underlying data changes. This is useful when you want your views to always reflect the live database state. Auto Refresh can be an easy replacement for manually polling for changes using AJAX. Or building something manually using web sockets.

Auto Refresh really feels like magic, because it’s so simple to set up.

IHP Server-Side Components provide a toolkit for building interactive client-side functionality without needing to write too much javascript.

The design is inspired by react and redux, but is executed mainly on the server. Compared to react components, IHP components are a lot more powerful as they can access the database and can run all the business logic of your backend.

Server-Side side components can simplify certain functionality. Especially when you’re dealing with code that requires lot’s of functionality that can only be provided by the server-side.

Additionally you get type-safety and avoid the troubles of maintaining two systems. 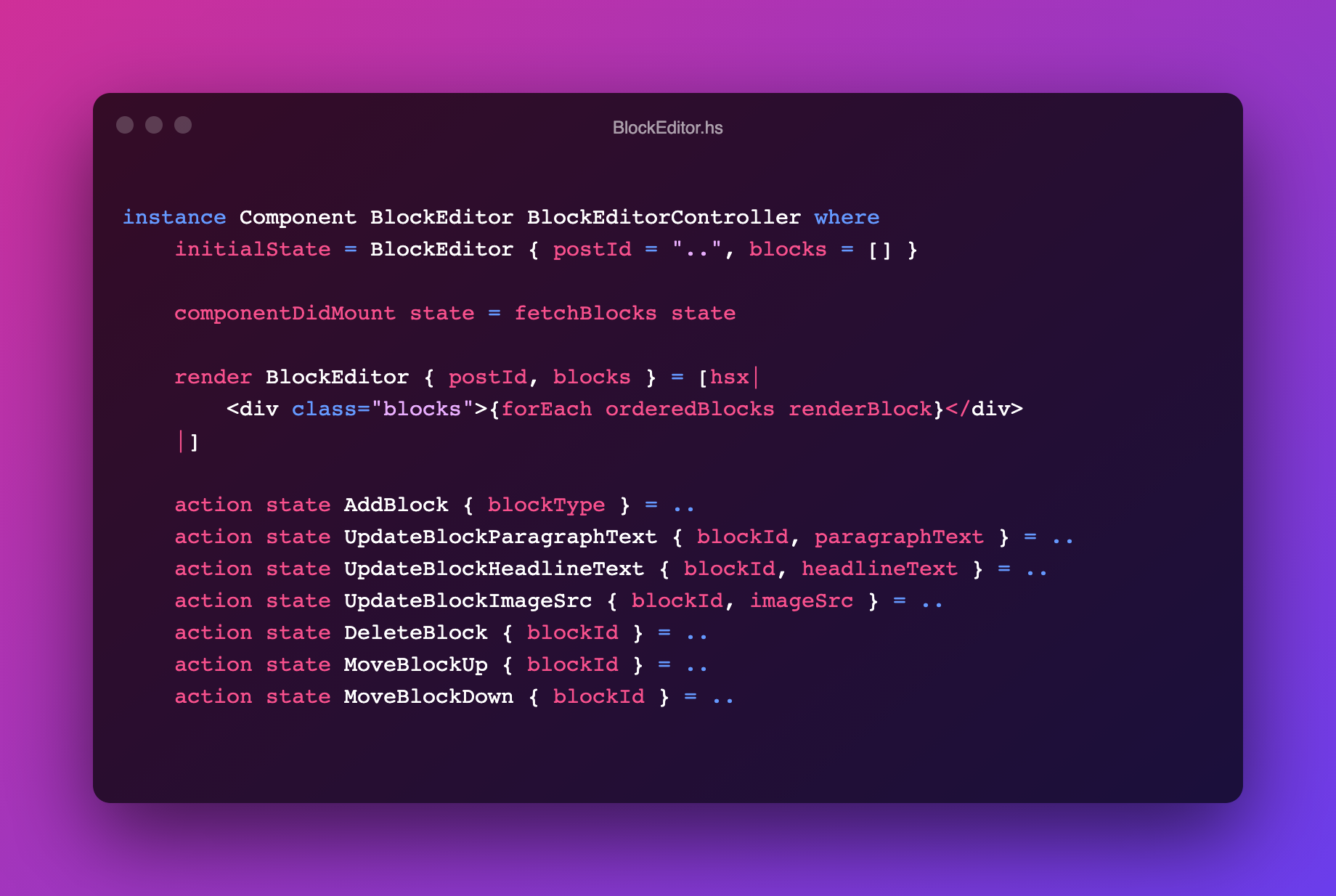 Out of the box IHP comes with Turbolinks-based JS setup that delivers Faster than Single page app performance.

The time between a mouse hover event and when the user actually triggers a click is more than 100ms. We prefetch the link on hover, and when the link click is actually triggered we replace the page’s HTML. We use morphdom, a popular dom diff & patch library, for replacing the old page HTML with the new HTML. This way only the changed DOM nodes are actually touched. So this is actually very similiar to how react works. This way you can even use CSS transitions on elements.

Usually Single page apps still need to fetch a bit of data and show a loading spinner when a link is clicked. With IHP the page is already there when it’s clicked.

This works out of the box, and makes IHP apps feel a lot snappier than most other apps.

Get Started with IHP NowWatch Video